On June 22, 1944, the Ames Chamber of Commerce was formed as a non-profit organization. The original mission statement was to “promote cooperation in all matters of interest to the business and professional men of the Ames community; to develop an increased civic interest; to create and maintain higher standards in business dealings; to correct trade abuses; to compile and distribute information to its members for their benefit; to aid and protect its members and to do all things as are properly within the scope of such an association for the welfare of its members and its community." 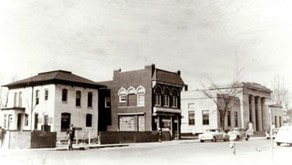 ​In the 60s, some of the unique issues that the Ames Chamber of Commerce were focused on were student housing for Iowa State University students and an ongoing shoplifting problem that was booming throughout the country.

​The Ames Chamber of Commerce noted 12 different focus areas in the 1970s, including Civic Affairs, Legislative Action, Cyclone Country Ambassadors, Commerce Committee, and many more. Some of the specific special projects underway at this time were the International Flying Farmers and Municipal Urban Renewal projects.

​In the late 80s, the Ames Chamber of Commerce and the Ames Economic Development Commission devoted a large portion of their efforts towards the upcoming Iowa State University Research Park. Dedicated to the technology industry, this development has vastly expanded the economic development of the community since it first opened in 1987.